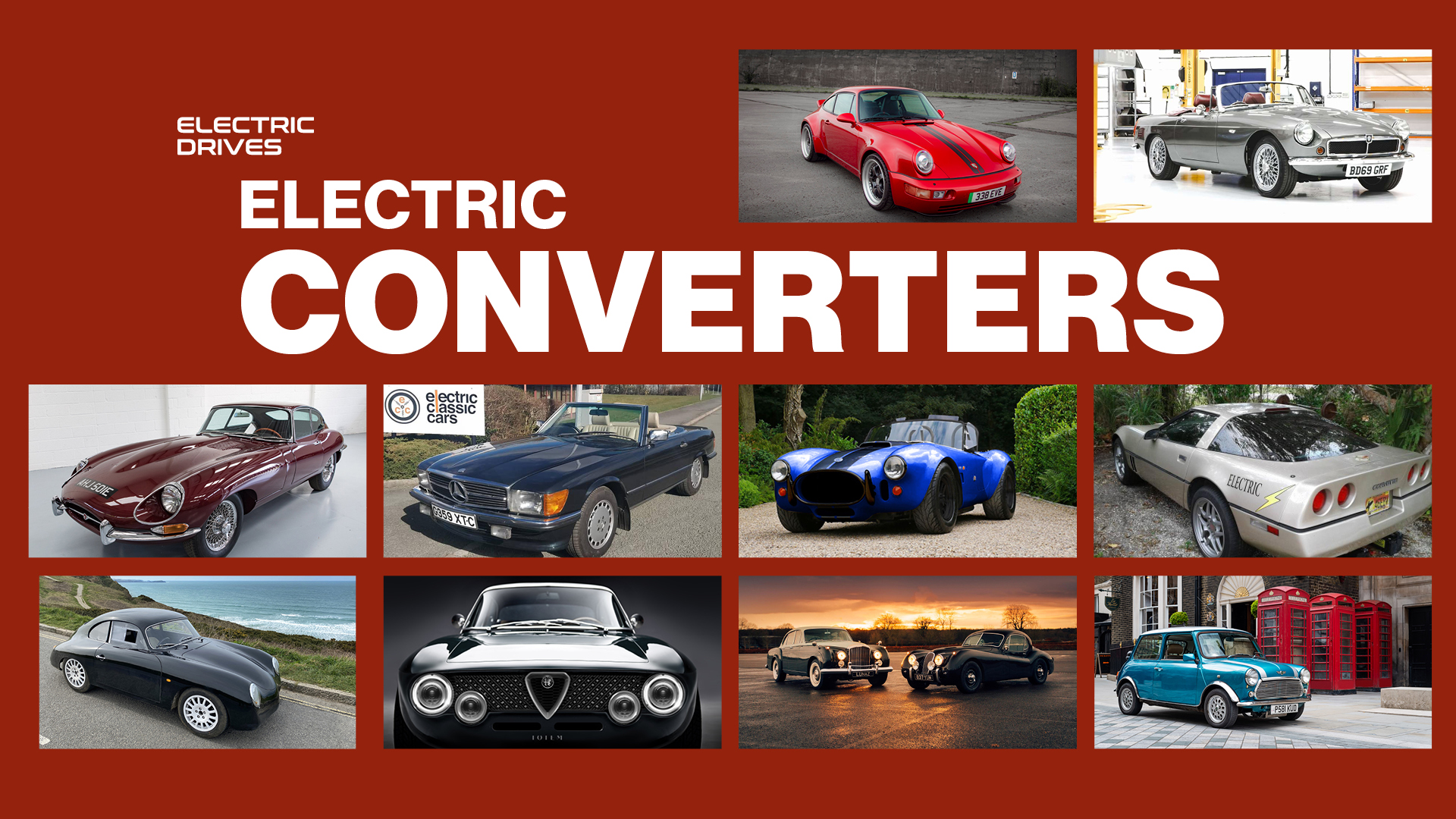 While the auto world is changing rapidly, many don’t want to see their favourite old cars fade away. Rather than restore to them their former combustion-engine glory, many see their favourite classics as cars of the future with useable zero-emissions electric powertrains. There are now a handful of companies around the world that are lovingly restoring and recreating these modern classics. Here’s ElectricDrives guide to the best in business:

Electric Classic Cars can either convert your classic to electric, source and build an electric classic to your specifications, or supply you with the parts you'd need to convert your own car to electric. They’re all about keeping classic cars untouched but bringing them into zero-emissions 21st-century vehicles with improved reliability and more power. Their conversions include a classic VW Beetle, Fiat 500, Porsche 911 and a Range Rover

Oxford-based Electrogenic are a team of technologists with a passion for classic motoring history and for contributing to a sustainable future. They take beautiful cars and make them all-electric, creating clean, green classic vehicles with all the modern benefits of the 21st-century. They have converted a wide range of vehicles including a 1963 VW Beetle, 1971 Rolls Royce Silver Shadow, 1951 Hudson Commodore 6A, Porsche 356, Citroen DS and an E-Type Jaguar.

Everrati is another Oxfordshire based converter and they passionately redefine the most iconic cars and make them relevant to the world today. Each car’s past is preserved by a meticulous, concours-standard restoration whilst simultaneously receiving a zero-emissions, full-electric powertrain that offers much improved levels of outright performance, refinement and sustainability. Their builds include a Mercedes SL W113 Pagoda, Land Rover Series IIA and several Porsche 911s, which has become a signature vehicle for Everrati.

Green Shed Conversions is a premier electric vehicle conversion company based in Crystal River, Florida. They offer a selection of quality electric car parts, DIY conversion kits and have some cars for sale. Green Shed can also provide one-on-one tech support for those converting their car to electric.

London Electric Cars’ mission is to get more people driving electric cars. Rather than scrap cars, they want to convert them into modern zero-emissions vehicles. They recommend budgeting £25,000 or more for an appropriate conversion and their latest conversion is a 1993 Rover Mini converted with a Nissan LEAF motor and drivetrain. They have also converted several Morris Minors, a Karmann Ghia, a classic Land Rover 2a and a Bentley T2.

Lunaz’s mission is to further the legacies of the most beautiful cars in the world. They say there’s no better proposition than timeless aesthetics propelled by the powertrain of the future. The Silverstone-based company started out converting high-end classics including a 1961 Rolls-Royce Phantom, a Bentley Continental and a Jaguar XK120. The company recently expanded by 500 percent to meet the demand for zero-emission vehicles. Lunaz are now upcycling existing passenger, industrial and commercial vehicles offering a sustainable alternative to replacing them with new. The company is so popular that David Beckham took a 10 percent stake in them.

Peter Swain, founder and CEO of RBW, is a motor enthusiast who saw that many classic cars faced an uncertain future in the modern world. He saw the potential for an electric car that had all the benefits of a modern vehicle but with the aesthetic appeal of a beautiful classic car. RBW was born and it now works with Zytek Automotive, owned by Continental AG, which operate alongside Continental Engineering Services (CES). With CES design building and manufacturing components, electric motors and safety systems for many of the top car manufacturers on the planet, it was the perfect partnership. RBW are currently building 30 MGBs all fitted with zero-emission electric motors.

Watt Electric Vehicle Company, the brainchild of Neil Yates, is both a manufacturer of premium electric vehicles and a technology leader enabling the niche vehicle industry to go electric thanks to its unique new electric car platform. Its sophisticated modular architecture can support the low volume production of almost any EV from small passenger cars to commercial vehicles. The brand’s 1950s-inspired two-seater sports Coupe is a true beauty that can hit 0-62mph (0-100kph) in just over five seconds and offers 220 miles (354km) of range.

San Diego, USA-based Zelectric Motors specialise in rebuilding and electrifying the Volkswagen Beetle, VW Microbus, Karmann Ghia, 1973-74 VW Thing and early Porsches. The company is the brainchild of award-winning designer-producers David Benardo and Bonnie Rodgers. After starting out a decade ago converting their first VW 1963 Beetle they have gone to create some truly beautiful electric vehicles. They lovingly convert these German classics and make them ready for 21st-century zero-emissions driving with high-performance electric powertrains. Air-cooled conversion prices start from $68,000.