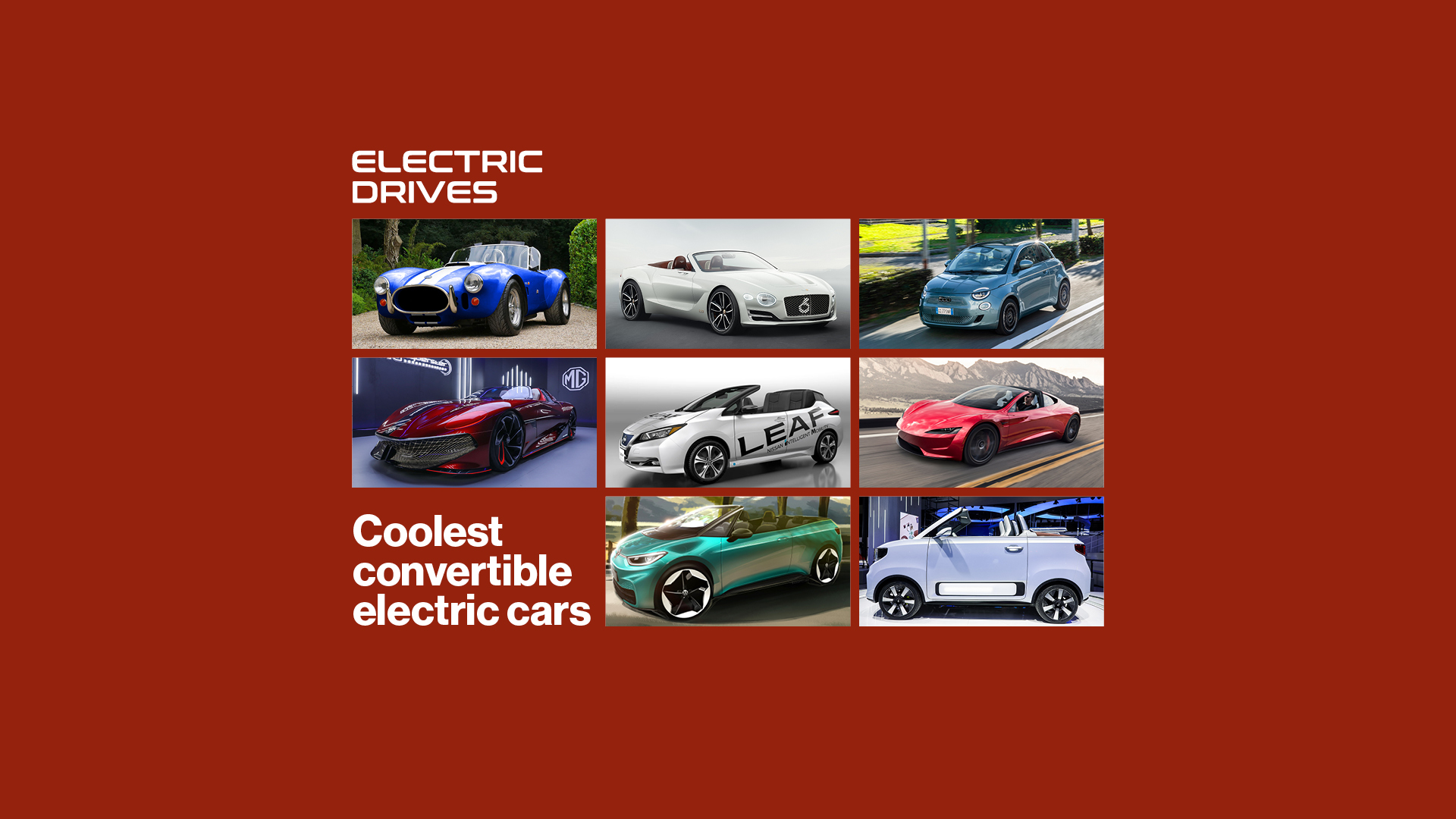 Coolest convertible electric cars that could be coming soon

ElectricDrives brings you the best zero-emissions cabriolets cars that are available, on the way or might be arriving

There’s no better feeling, or the dream, of the sun on your face with the wind in your hair while quietly cruising along a road in a beautiful location with the top down on your electric car. Currently, there are very few choices when it comes to convertible electric cars but more are on the way and some might become available if the interest is there. Here’s ElectricDrive’s guide to the best cabriolets out there.

AC Cars, famously known for their Cobra sports car, recently announced the launch of its new AC Cobra Series 4–electric sports car. It combines classy looks, heritage and performance in a stunning zero-emissions package. The new electric AC Cobra will be based on the brand popular AC Cobra Mk IV.

The British carmaker have collaborated with Derby-based technology Falcon Electric. This company is well known for making powerful and torquey powertrains that make electric cars even more exciting.

Back in 2017, the luxury British car brand revealed its all-electric Bentley EXP 12 Speed 6e convertible. It was built to gather customer feedback on electric cars and show what the brand could build.

The EXP 12 Speed 6e followed on from Bentley’s EXP 10 Speed 6 coupe concept, which had made its debut two years earlier with a hybrid powertrain. Bentley didn’t give any range figures for the zero-emissions EXP 12 Speed 6e but said a production model would need to have at least 200-300 miles (322-483km).

It’s a wonderful display of what a luxury convertible battery electric vehicle (BEV) could be. This tailpipe-free convertible is pure class. It could be with us sooner than expected with Bentley committing to electrification by only producing plug-in hybrids and battery electric cars by 2026.

Here’s one of the few convertibles electric cars that is available now with prices starting at £30,496. The neat-looking New 500 mini car is a fabulous modern version of the classic Fiat 500 and is especially good for around-town driving.

The New 500 has a smartly finished interior and is a fun and easy car to drive and even easier to park. It feels just like the regular hatchback but has the summer bonus of a drop-top. A great way to feel the breeze on your face without spending a fortune.

The Cyberster was developed by the team at the MG Advanced Design Centre in London. The two-seater sports car might look futuristic and fit for a superhero, but does recall the brand’s tradition drawing several styling cues from the classic MGB Roadster.

The body is designed to enhance aerodynamic performance with the classically shaped MG grille serving as an air duct to ensure airflow over the car’s chassis. This helps efficiency and handling.

The Cyberster, which was first seen at the Shanghai Auto Show earlier this year, is impressive looking inside and out. As is the intelligent all-electric architecture enabling it to travel up to 500 miles (800km) on a single charge. It will also accelerate from 0-62 mph (0-100kph) in less than three seconds.

After being revealed at the Shanghai Auto Show MG have monitoring interest and hoping to achieve 5000 registrations by 31 July. The Cyberster could be a reality in the near future.

To celebrate 100,000 sales in Japan, Nissan created a special one-off convertible LEAF, dubbed the LEAF Open Air. While there were no plans to take it into production we do have to wonder if this is a missed opportunity with so few roofless zero-emissions cars on the market.

The LEAF is one of the most popular electric cars and was first launched back in 2010 and has now sold over half-million worldwide. It’s also one of the most affordable with prices starting from £25,995.

The one-off special is a little odd-looking being based on a hatchback rather than a deliberate cabriolet but we like it and think it could be the basis of something special.

Nissan did make a hybrid convertible called the Murano CrossCabriotlet but was discontinued in 2014. We just hope with all their experience in producing electric cars Nissan offer something for the summer soon.

Tesla’s all-wheel-drive Roadster, which was unveiled in 2017, is currently available to order and production is expected to start next year following a few delays. It’s not a full convertible but more of a targa top with the roof receding over the driver and passenger on this compact four-seater sports car.

This all-electric sports car is sleekly designed to maximise aerodynamics to help with record-setting performance and efficiency. On the road specs are impressive with the Roadster competing with the best super and hypercars on the market.

Earlier this year Volkswagen released illustrations of what their ID.3 electric car might look like if they made it as a convertible. It has a near-identical design to the zero-emission hatchback that has been on sale since the summer of 2020.

The illustrations of the convertible show what a potential Volkswagen ID.3 cabriolet could look like. It retains many of the features of the ID.3 that has won so many fans with its clean body lines, long low angle windscreen and short-snouted boxy front-end.

It has elements of both the Beetle and the Golf, which were two of the brand’s biggest sellers of their time. We don’t expect this neat looking convertible to hit the roads this summer but it could be ready to roll in 2022 or 2023.

The convertible will build on the success of one of the world’s most popular electric vehicles when it goes into production in 2022. The Hong Guang MINI EV Cabrio has a chic exterior design, with a stylish two-tone colour scheme and the addition of six-spoke wheels will appeal to a younger hip generation.

We love that this looks almost like a child’s toy and we’re sure it will be an extremely competitively priced way of feeling the wind in your hair while not worrying about tailpipe emissions.