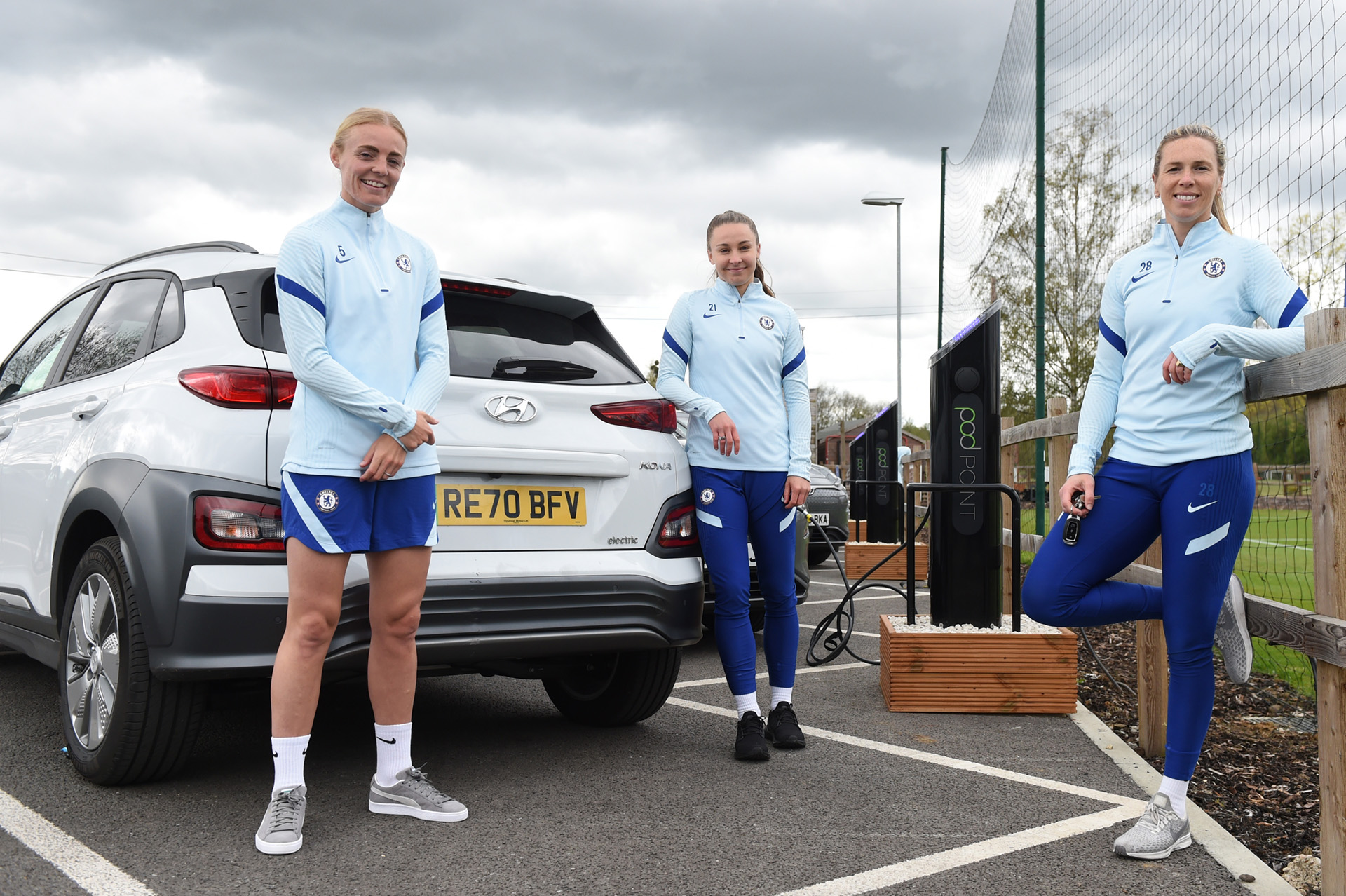 Hyundai’s ‘Turn the Blues, Green’ campaign designed to educate the public on making the switch to electric vehicles (EVs)

Hyundai Motor UK is supplying its KONA Electric sports utility vehicles (SUVs) to Chelsea Football Club. Hyundai and Chelsea have teamed up to create a ‘Turn the Blues, Green’ brand campaign using football stars to educate the fans and public on making the switch to electric vehicles (EVs).

As part of the ‘Turn the Blues, Green’ campaign, Chelsea Football Club and Hyundai have also installed six electric charging points at the team’s Cobham Training Centre. This will allow the players to plug in their KONA Electric SUVs while training.

Chelsea’s female stars, who were recently crowned Football Association’s (FA) Super League Champions for the second season in succession, are already on the ball with battery-electric vehicle (BEV) technology, having taken delivery of their first batch of KONA Electric SUVs.

Magdalena Eriksson, team captain, said: “Having the charging points at the training centre is a complete luxury. We can just plug in before we start training, and then we can drive home with a full battery.”

Pernille Harder, Chelsea striker, said: “We had no idea how easy it was to charge an electric car. At first, we had the manual out and everything, and then we realised how quick, easy and smooth it was to plug the KONA Electric in.”

Hyundai’s KONA Electric offers the players up to 300 miles (483km) of range and can recharge the battery in 47 minutes using a 50-kW direct current (DC) charging station.

Sophie Ingle, Chelsea midfielder, said: “I drove one long trip to Wales and back, and the KONA Electric feels just as easy to live with as a petrol or diesel car.”

The ‘Turn the Blues, Green’ campaign will initially run through the 2021/22 season, with KONA Electric models supplied to the club.

Guy Laurence, Chelsea FC CEO, said: “With the introduction of the ‘Turn the Blues, Green’ campaign, our players are stepping up a gear by getting behind the wheel of Hyundai's zero-emission KONA Electric SUV.

“Stories of their driving adventures will help inform the public of the importance of sustainable mobility as we move towards the UK’s regulation changes on cars powered solely by a petrol or diesel engine in 2030. We have an exciting future ahead with Hyundai, of which sustainability is a big focus.”

Ashley Andrew, Hyundai Motor UK managing director, said: “A lack of experience and education can often prove an initial barrier for first-time EV owners, so creating this platform to tell these stories in a relatable way to fans and customers is truly an innovative solution.

“We are certain that it will give potential customers additional confidence to make the switch to EVs and, like the Blues, turn their own lives Green.”