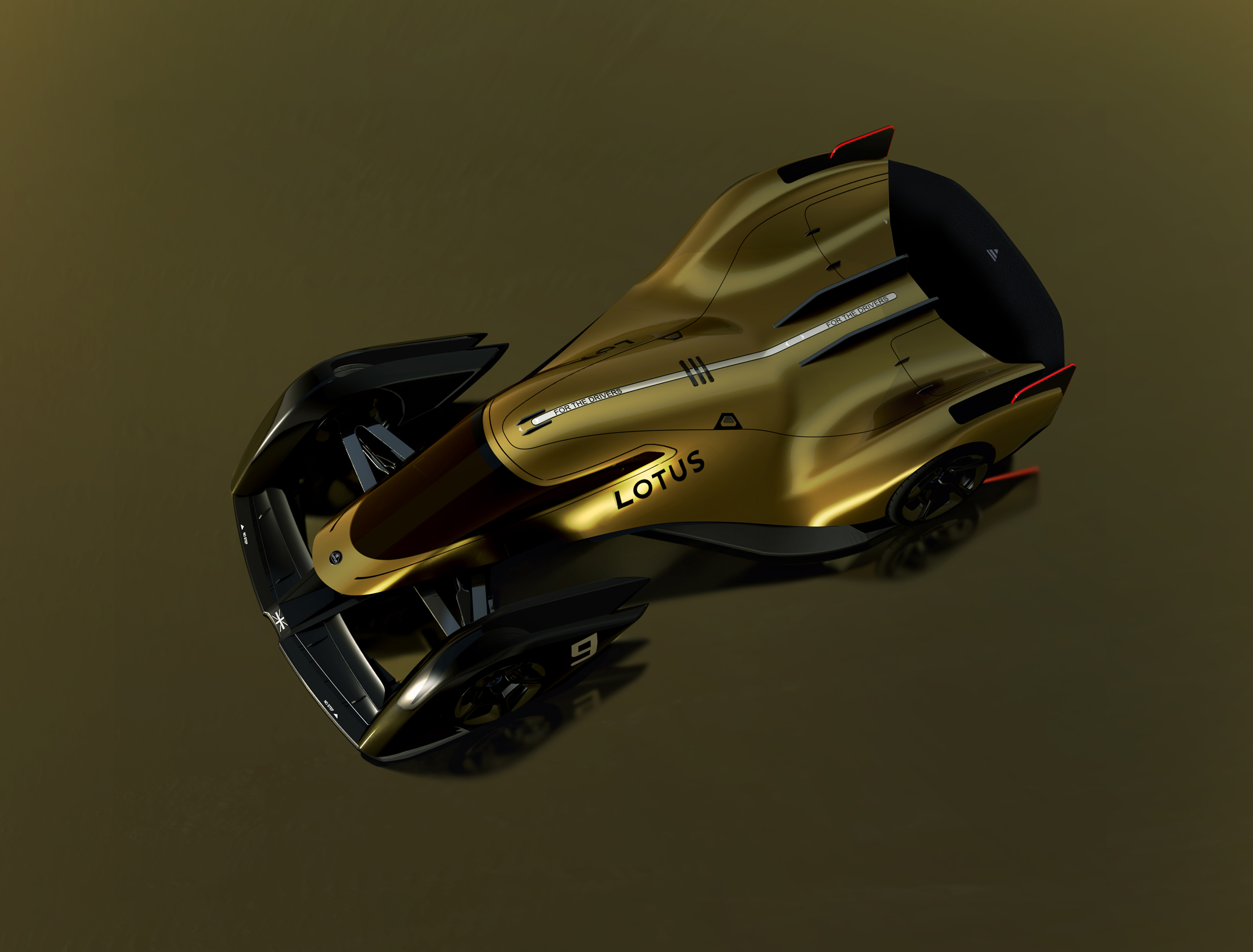 Lotus have unveiled their new E-R9 electric race car. The British company says it’s a dramatic new design study for the next-generation of pure electric endurance race cars that could be on the starting grid of circuits around the world for the 2030 season.

It has been finished in striking black and gold, which is a clear nod to Lotus’ pioneering motorsport heritage that led to 13 Formula 1 championship titles. This futuristic-looking electric car features a sleek fighter jet-style canopy centrally mounted in a delta-wing upper body. Innovations include advanced active aerodynamics with morphing body panels and vertically mounted control surfaces to assist with high-speed cornering.

The E-R9 has been created as a technology showcase of its philosophy, capability and innovative spirit in the fields of advanced electrified powertrains and aerodynamics. E-R stands for Endurance Racer, while 9 is the car’s competition number carefully chosen in tribute to Lotus’ racing past.

The E-R9 was developed by the engineering team of Richard Hill, chief aerodynamicist at Lotus, and Louis Kerr, principal platform engineer on the Lotus Evija pure-electric hypercar. Visually it was brought to life by the Lotus Design team, led by Russell Carr, Design Director for Lotus.

Chief among the car’s aero innovations are its morphing body panels. Located across the delta-wing profile, these active adaptable surfaces can change their shape and attitude to the airflow either at the press of a button or automatically according to performance sensor inputs. This would deliver minimum drag on the straights and maximum downforce in the corners. It would also make the car more efficient.

Vertical control surfaces at the rear would generate aerodynamic forces to help the car change direction, without the limitations of grip at the tyre contact patch. The result is a racer that’s partly driven like a car and partly flown like a fighter jet.

The Lotus E-R9 features an advanced electric drivetrain powering each wheel independently, a system enhanced with torque-vectoring. It builds on technology already integrated on the Lotus Evija pure-electric hypercar, though the E-R9 would be fully adjustable by the driver on the move.

Richard Hill, chief aerodynamicist at Lotus, said: “What we’ve tried to do is to push the boundaries of where we are technically today and extrapolate into the future. The Lotus E-R9 incorporates technologies which we fully expect to develop and be practical. Lotus has an amazing history of developing unique solutions, and we’ve done it many times in motorsport and with our road cars.”

Louis Kerr, Vehicle architect at Lotus, said: “Battery energy density and power density are developing significantly year on year. Before 2030, we’ll have mixed cell chemistry batteries that give the best of both worlds, as well as the ability to ‘hot-swap’ batteries during pitstops.”

All of this is extremely impressive by the forward thinking engineers at Lotus. Often high-level development on this scale shapes the future and could become filter down technology that has the potential to help everyone on the road in years to come.