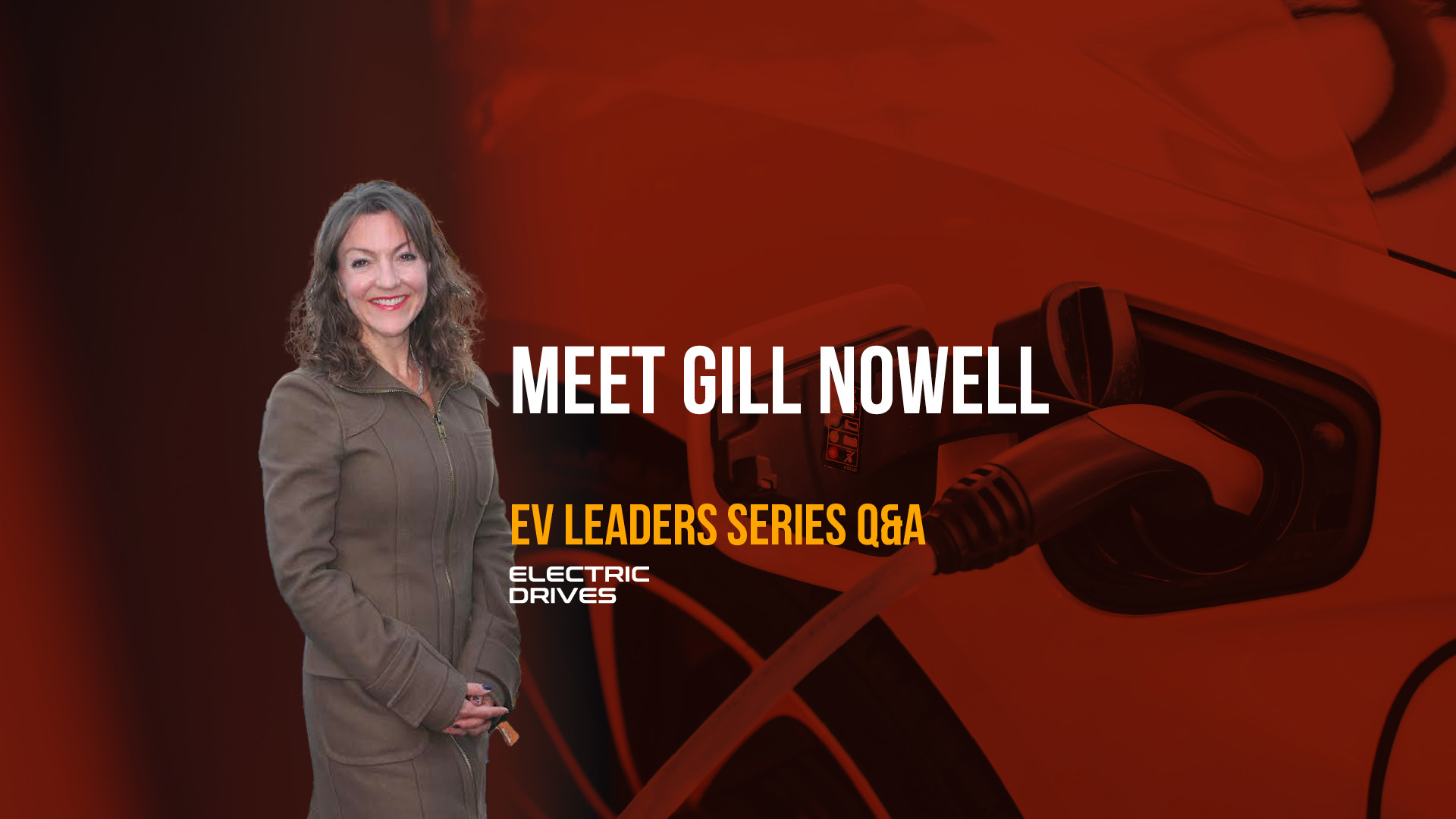 Gill Nowell has over 20 years of experience across the sustainable energy, utility and environmental technologies sectors. She has been working in the electric vehicle sphere for almost a decade and has been involved with some groundbreaking projects during this journey.

Gill’s journey into the electric vehicle world started when she worked on the pioneering My Electric Avenue project at EA Technology and then went to create EV Clicks, an online source of electric vehicle pictures.

Gill is media trained and enjoy appearances on radio shows and has also appeared on the BBC’s Countryfile TV show, all in the spirit of advocating for electric vehicle uptake. She’s currently Head of Electric Vehicle Communications at LV = General Insurance.

We caught up with one of the most dynamic and forward-thinking people in the world of electric vehicles:

EDs: You’re a genuine electric vehicle pioneer. What first brought you to the emobility sector?

I distinctly remember the moment that it all started on one sunny day in June 2012. I was on day two in my new job at EA Technology and my boss asked me to complete an expression of interest form. This was to kick start the funding application process for what was to become the, dare I say it, truly pioneering My Electric Avenue project.

EDs: What was the My Electric Avenue project?

My Electric Avenue was the first project in the UK, if not the world, to understand the impact of clusters of electric cars charging on the local electricity network through real-world trials with over 200 drivers.

It also tested early demand control technology. This was when the Nissan LEAF was one of the few viable battery electric cars available on the market and before smart charging was a thing. As part of that project - we won the funding - I had my first test drive in an electric car.

From the moment I turned to the person in the passenger seat and asked: “So how do I turn it on” to which their reply was: “Gill, it is on” I was smitten. I’ve been advocating for electric car uptake ever since.

EDs: What changes, or series of changes, have you seen in your time working in the electric vehicle space?

The most striking shift I’ve seen in almost a decade of working in the EV space is one of attitudinal change. Back in 2012, there was no consensus on whether electric cars would really take off. Today, people are talking about ‘when’ not ‘if’ their next car will be electric.

Technology has advanced at an astonishing speed too. Over half of all electric cars today will go for over 200 miles (322km) on a single charge, with over one third having a range of over 250 miles (402km). Plus, there are cars that happily do well over 300 miles (483km), not to mention emerging EVs with 400 miles (644km) plus of range. Battery technology is the jewel in the crown of electric cars.

EDs: How important is range in the real world?

Even though we know most people in the UK drive under 30 miles (48km) on a daily basis, it could be argued that perception of need is just as important as actual need itself.

Charging infrastructure is also advancing at speed, with a large focus now on providing solutions for those who can’t charge at home. I think that community charging is one to watch with interest in this area. If I can offer my home charger to a neighbour who doesn’t have access to off-street charging, that’s a win-win.

EDs: Could you explain EV Clicks and its purpose?

Over the years I’ve often needed to find EV and charging photos to use in project work and presentations. Although there are lots of great, professionally taken images available to use and buy, I often struggled to find true to life images. I decided to do something about it.

I founded EVclicks in February 2018 as an open source image library of electric cars and chargers. People are welcome to use the photos, free of charge, in support of the transition to electric vehicles. Photos are donated from across the globe, mainly through Twitter, but we’re now encouraging people to email them in.

EDs: How many images are available and where are they used?

There are almost 4,000 images across a wide range of galleries on the website. Recently we’ve had an influx of photos from China, so have set up a dedicated gallery for Chinese EVs. I need to give a special shout out of thanks to @The_PlugSeeker who is an endless source of support and creativity, giving up so much of his time in keeping the galleries in shape.

The images have been used by government campaigns, trade associations, in videos and presentations. I’m so glad that it’s proving to be a useful resource within the EV community and beyond.

EDs: You helped set up EVA England. Can you tell us more about that?

It was an honour to be a founding director of Electric Vehicle Association (EVA) England. As a voluntary organisation with no commercial interests, we set up as a community interest company in June 2020, to offer a voice to both prospective and current electric car drivers in England.

It’s astonishing what EVA England has achieved in such a short space of time, through establishing itself as a bona fide conduit for representing the views of electric car drivers into Government and beyond.

I was sad to step away from formal involvement in it but remain a keen and active paid-up member. I couldn’t have wished to work with a more passionate, professional and generally fantastic group of people. I’m looking forward to seeing EVA England grow in impact and influence as part of a truly global movement.

EVA England is a founding member of the Global Electric Vehicle Alliance (GEVA). At the time of writing it has 44 national EV driver associations from 28 countries under its membership.

EDs: You’re now Head of Electric Vehicle Communications at LV. What led you to want to work at LV?

I recall seeing LV= General Insurance at Fully Charged LIVE in 2019. It really stood out as being the only insurance company at the event, and the only one with a well thought through, EV driver-focused insurance product.

When I was approached about a job with LV= GI, my interest was instantly piqued. When I found out that my role would be entirely focused on electric cars as EV spokesperson for LV= GI, but also responsible for communications around an exciting new proposition called ElectriX, I was sold.

ElectriX takes drivers on a journey of electric car discovery, from helping people decide on whether an electric car is right for them, through to understanding how to charge an electric car, and what it will cost to own and run one. It’s brilliant to be able to bring my experience to bear on such an exciting and potentially market-leading opportunity.

EDs: Do you see the transition to full battery electric vehicles as inevitable?

EDs: What do you think the biggest challenge to the successful take up of electric cars is?

The biggest challenge is complacency and underestimating the ongoing and urgent need to sustain our efforts in helping people make the switch to battery electric cars. Cost is also a huge issue.

LV= GI has found that 45 percent of people are put off getting an electric vehicle due to the high upfront cost. The good news is that we’ve found that electric car running costs are around half that of petrol cars. The elephant in the room though, I think, is that of supply, which is a challenge across the automotive sector at the moment due to the microchip shortage.

EDs: Do you think that the next major challenge is for emobility to be aligned with sustainability?

I’d say that emobility, health outcomes and sustainability are intrinsically interlinked. If we consider that 40,000 people die too soon in the UK every year due to poor air quality that is directly attributable to road transport emissions, there can be little doubt that for a healthier, more sustainable future, we need to everything in our power to make sure that if we need to use a car to get from A to B, then that car should be 100 percent battery electric.

EDs: What has been the thing you’ve most enjoyed seeing in your electric vehicle career, so far?

Just before lockdown in 2020, I took my second hand Nissan LEAF into my children’s primary school as part of an assembly on climate change. The interest and enthusiasm from the children was fantastic. I showed them around the car, asked them where the exhaust was, whether they thought it was switched on.

I even had a couple of parents approach me afterwards to ask about making the switch. My children are why I am so passionate about EVs. They deserve to breathe easy. I read recently that 3.1 million children walk to school every day in dangerous levels of air pollution. That’s not acceptable and that is why we need to work together to clean up our act.

EDs: Where do you see the future for sustainable transport?

You may have noticed that I’m a huge advocate of electric cars, however, I’m also a fan of walking, cycling and using sustainable public transport wherever possible.

I see the future as being a blend of solutions, with more electric car sharing, more community charging, and taking steps to ensure that communities have their say when it comes to creating clean air and healthy environments for our children and future generations to enjoy and move around in.