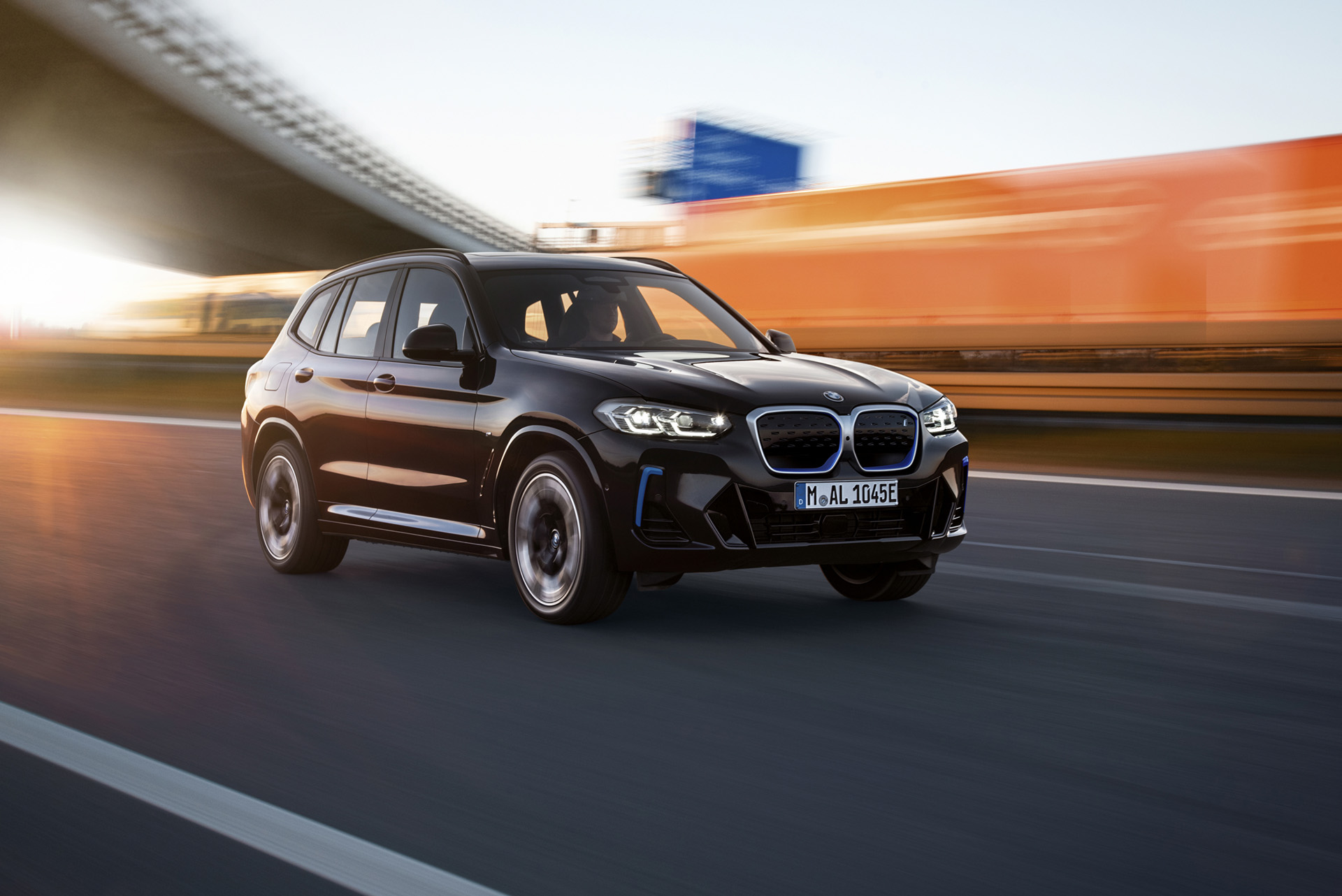 The new BMW iX3 electric car has undergone an exterior design refresh and introduced the M Sport Package as standard in the UK. The new styling gives the iX3 a sharper look and lending the front end a distinct similarity to that of the BMW iX and BMW i4.

The most noticeable change on first viewing is the kidney-shaped grille is now larger using a single-piece frame. Plus, the headlight contours are now 10 millimetres slimmer.

The lower air intake, which comes with ten-stage active air flap control to cool the drive system components and brakes, is now bigger. The air curtains positioned at the outer edges of the front end are now L-shaped with blue accents.

The outer elements of the rear diffuser are in BMW i Blue and the contours of the fully LED rear lights are marked out even more precisely by a black surround. The striking design at night is defined by the slim light graphic and new three-dimensional pincer-shaped contouring with delicately integrated, horizontal turn signal indicators.

The iX3 uses BMW Group’s fifth-generation eDrive technology. This includes an innovative charging unit that sends power to both the 400V battery and the 12V onboard power supply. When charging using alternating current, it enables both single-phase and three-phase charging up to 11kW.

Plugging the vehicle into a direct current rapid-charging station opens the door to charging outputs of up to 150kW. This means the high-voltage battery can be charged up 80 percent in just 34 minutes. Drivers can inject the power required to add 62 miles (100km) to the car’s range in just 10 minutes.

The gravimetric energy density of the 188 prismatic cells in the new BMW iX3 is around 20 percent higher than that of the battery cells used in previous fully-electric BMW Group vehicles. A gross energy content of 80kWh, of which 74kWh is utilised, and the high efficiency of the drive systems provide the iX3 with a range of up to 286 miles (460km)

With the launch of BMW Charging in the UK, BMW iX3 customers have access to one of the world’s largest public charging networks using just one RFID card or App. Using a single BMW Charging card or BMW Charging App, customers can charge at more than 11,000 charging points from different operators across the UK, as well as 173,000 charge points across Europe.

Drivers can also access charge points from a range of operators, with the current network including bp pulse (including ChargeYourCar), ESB, Osprey, Source London and Chargepoint Network UK (including INSTAVOLT) and others.

The BMW iX3 M Sport and BMW iX3 M Sport Pro are now slicker and more efficient. They’re now available to order, with deliveries expected in December, and will cost £59,730 and £62,730 respectively.