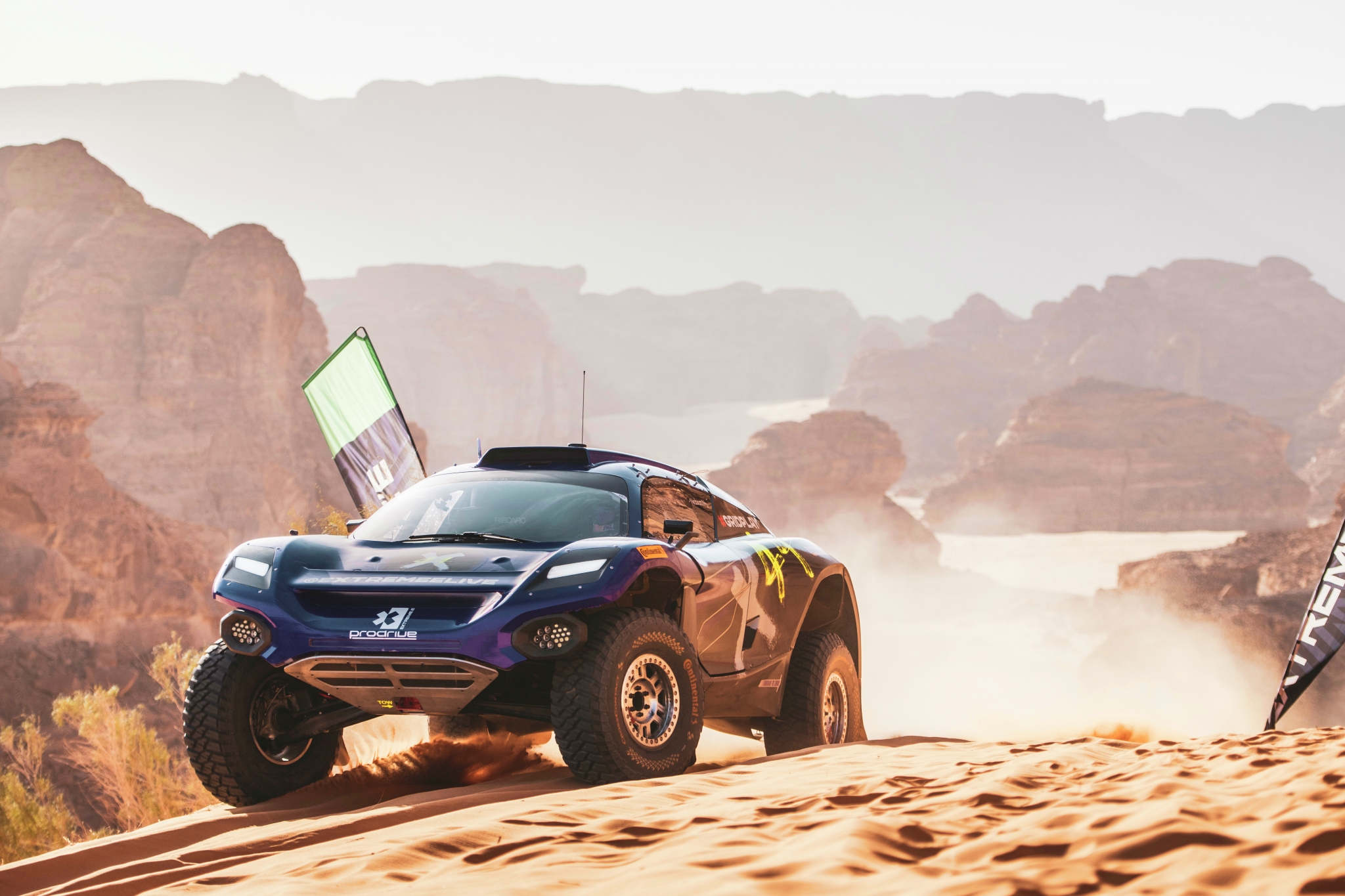 Rosberg X Racing duo Johan Kristoffersson and Molly Taylor took top honours at this weekend’s inaugural Extreme E off-road electric car racing event. The duo were the pace-setters from the outset at the zero-emissions race weekend in Alula, Saudi Arabia. The pair still had to dig deep in the desert to battle their way to victory and carve themselves out a piece of motorsport history.

Extreme E is a radical new racing series that sees electric all-electric sports utility vehicles competing in extreme environments around the world which have already been damaged or affected by climate and environmental issues. The five-race global voyage has been designed to highlight the impact of climate change and human interference in some of the world’s most remote locations. It also promotes the adoption of electric vehicles in the quest for a lower carbon future for the planet.

Following a day of qualifying time trials, the drivers went on to race wheel-to-wheel for the first time. It generated some top-class racing, and crashing, from some of the best male and female drivers from around the globe.

At the end of a tough day of hard-fought racing it was the Rosberg X Racing team of Johan Kristoffersson and Molly Taylor who outshone the competition. Second place went to the Andretti United team of Timmy Hansen and Catie Munnings who completed their two laps just under 24 seconds slower. Team X44, which is owned by Lewis Hamilton, saw drivers Sébastien Loeb and Cristina Gutiérrez round out the podium one minute and 38 seconds off the pace.

Alejandro Agag, founder and CEO of Extreme E, said: “I’ve never seen such extreme racing in my life. This first race weekend will have a huge influence on how Extreme E evolves. I feel so proud is that we have built this platform where female drivers can shine like they deserve.

“What we have seen from them here is extraordinary, some incredible talent and courage. Ultimately, nothing could stop Kristoffersson and Taylor from storming to the top step of the podium. It was a virtuoso display of speed, skill and superhuman car control in the most challenging of conditions.”

Nico Rosberg, Rosberg X Racing founder and CEO, said: “This is insane. I’m so thankful to the whole team for the effort put in this weekend. We have a fantastic team of engineers and mechanics, who prepared perfectly for this first weekend with so many unknowns. Molly and Johan produced some phenomenal driving. Neither of them put a foot wrong in really tough conditions, and they both showed unbelievable speed out there.”

Molly Taylor, Rosberg X Racing driver, said: “What an amazing start to the season. It’s pretty cool to be part of this journey at the start of something that I think has an amazing future. This series is throwing the traditional rule book out of the window and starting afresh, and everyone will agree it was spectacular to watch. The male drivers here are the best in any motorsport category in the world, so it’s an awesome opportunity for us female drivers and a real investment in the development of female racing talent.

Johan Kristoffersson, Rosberg X Racing driver, said: “Congratulations to the team. The Rosberg X Racing guys did an amazing job to give Molly and myself such a great car. Molly performed fantastically. She made the difference in the first qualifying session. It’s been such an amazing team effort overall, and I’m happy and already looking forward to the next event in Senegal.”