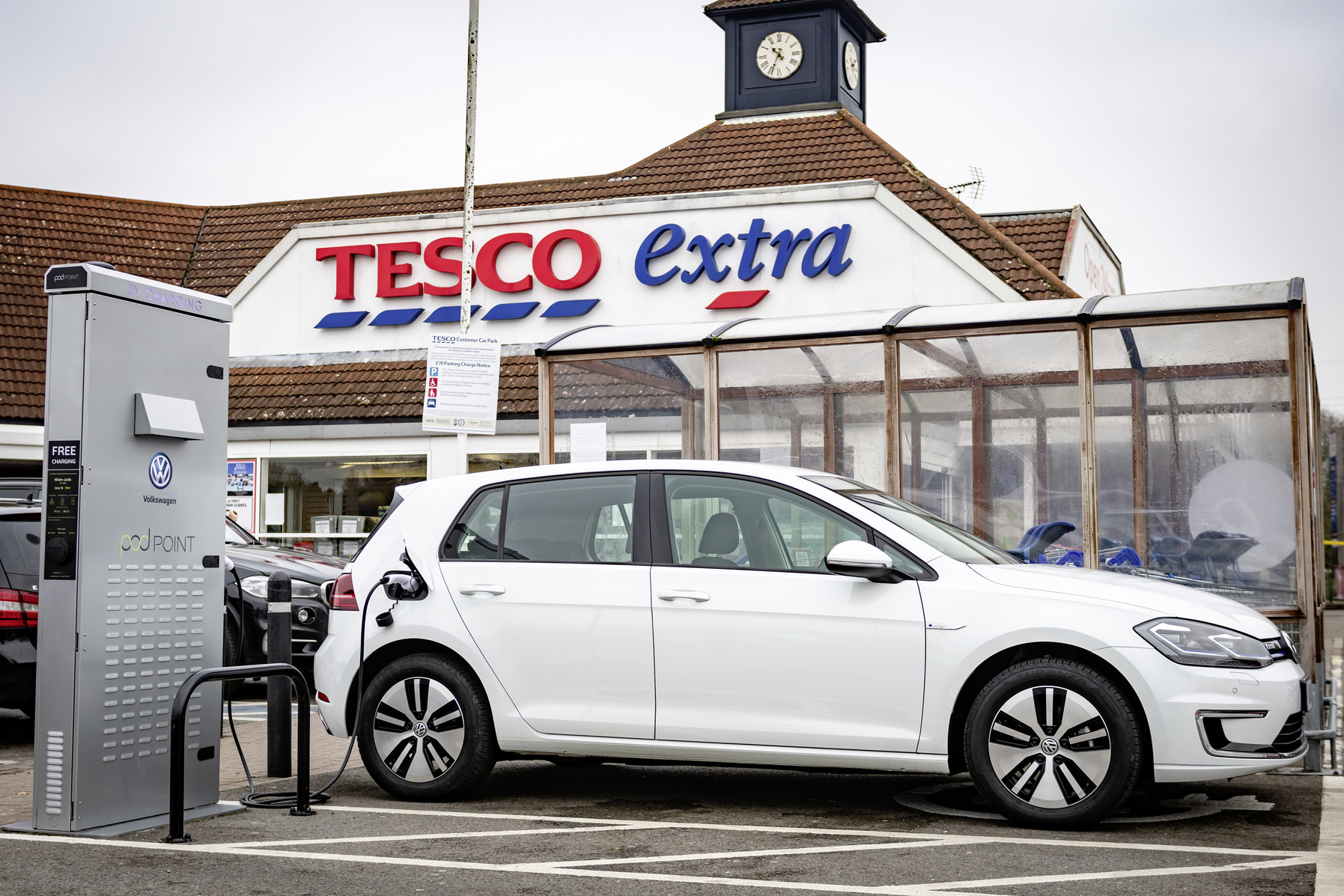 Supermarkets in the UK, including Tesco, Morrisons, Asda and Lidl, have added nearly 1,000 electric vehicle (EV) charge points since early 2020

In the UK 1,300 supermarkets now offer electric vehicle (EV) charging facilities. Nearly 1,000 new electric car charge points have been installed at supermarkets in the last 21 months, according to data analysed by Zap-Map and the RAC.

This takes the total number of electric vehicle charger units at supermarkets sites to 2,059. This is up 85 percent from 1,112 in January 2020. This means nearly eight percent of all the UK’s 26,000 publicly accessible charge points are located at supermarkets, which is up from 6.5 percent in early 2020.

Tesco are leading the way having added more electric car chargers than any other supermarket. They have installed 641 devices, giving it a total of 922 across its 4,008 stores.

This is 676 more than its nearest electric vehicle charging rival Asda which has 246 chargers. This means the supermarket giant now has charging facilities at 514 of its sites, which is 372 more than at the start of last year.

Morrisons installed chargers at 112 stores over the 21 months studied by Zap-Map and the RAC giving it a total of 201 sites with charging facilities. This means 40 percent of its estate now offers electric car charging, the greatest proportion of any supermarket.

Its nearest rival Lidl has chargers at a quarter (24 percent) of its stores after adding charging facilities at 141 locations to give it 203 sites in total. The data shows few supermarkets other than Tesco, Morrisons, Asda and Lidl have, to date, decided to invest heavily in electric vehicle chargers for their customers.

The RAC and Zap-Map have both long advocated the importance of supermarkets offering customers charging facilities because customers spend around 45 minutes on average in their stores. This is an ample amount of time to top up an electric car.

The RAC also believes that the availability of rapid charge points is vitally important to enabling drivers to make longer journeys conveniently. Plus, it helps those that don’t have the facility to easily install a home charger.

When it comes to rapid charge points, 280 have been installed at supermarkets from the start of 2020 to September 2021. This means there are now 454 rapid charger devices for shoppers to use.

Morrisons is leading the way with rapid devices at 40 percent (197 locations) of its 497 stores compared to nearest rival Lidl which has 150 rapid charging locations, representing 17 percent of its 860 stores.

Tesco has more chargers of any speed but currently lags behind Morrisons and Lidl when it comes to rapid devices with just 64. All but two of those were added since early 2020.

Waitrose and Shell have announced plans to install hundreds of electric vehicle (EV) charging points in the supermarket’s car parks in coming years. This will more than double the number of Shell forecourt shops where Waitrose food is available.

Sarah Winward-Kotecha, RAC director of EVs, said: “While the majority of drivers going electric will be fortunate enough to be able to charge easily on their driveways at home, for the remainder it won’t be so easy so having access to free, or affordable, charging facilities at supermarkets is very important, and could even help accelerate EV take-up in the first place.

“Rapid charge points, in particular, make it possible to run an EV easily without access to a home charger as drivers can get their cars topped up in the time it takes them to do their weekly shop.

“We call on all the supermarket chains to let their customers know what to expect when it comes to EV charging provision and recognise the vital role they play in encouraging many more drivers to opt for electric cars next time they change their vehicles.”

Melanie Shufflebotham, Zap-Map co-founder, said: “Over the past 12 months there have been more than 130,000 new drivers of electric cars on UK roads and usage of public charging has surged since the lockdown has eased.

“To support the increased demand, more charge points will be needed in the future, so it is encouraging to see the progress made by the supermarkets. These facilities will be good both for ‘top-up’ charging and as a replacement for home charging.

The RAC is helping make the switch to a zero-emission electric vehicle as easy as possible for drivers. It’s leading the way in electric roadside assistance by offering drivers complete peace of mind with its EV Boost lightweight mobile charging units.

The RAC is also making the switch more affordable with its EV leasing service which enables drivers to go electric for as little as £227.99 a month. Customers can also get a home charger installed and take advantage of a specialist electricity tariff which offers off-peak charging between 12-5am GMT at just 6-pence per kWh.