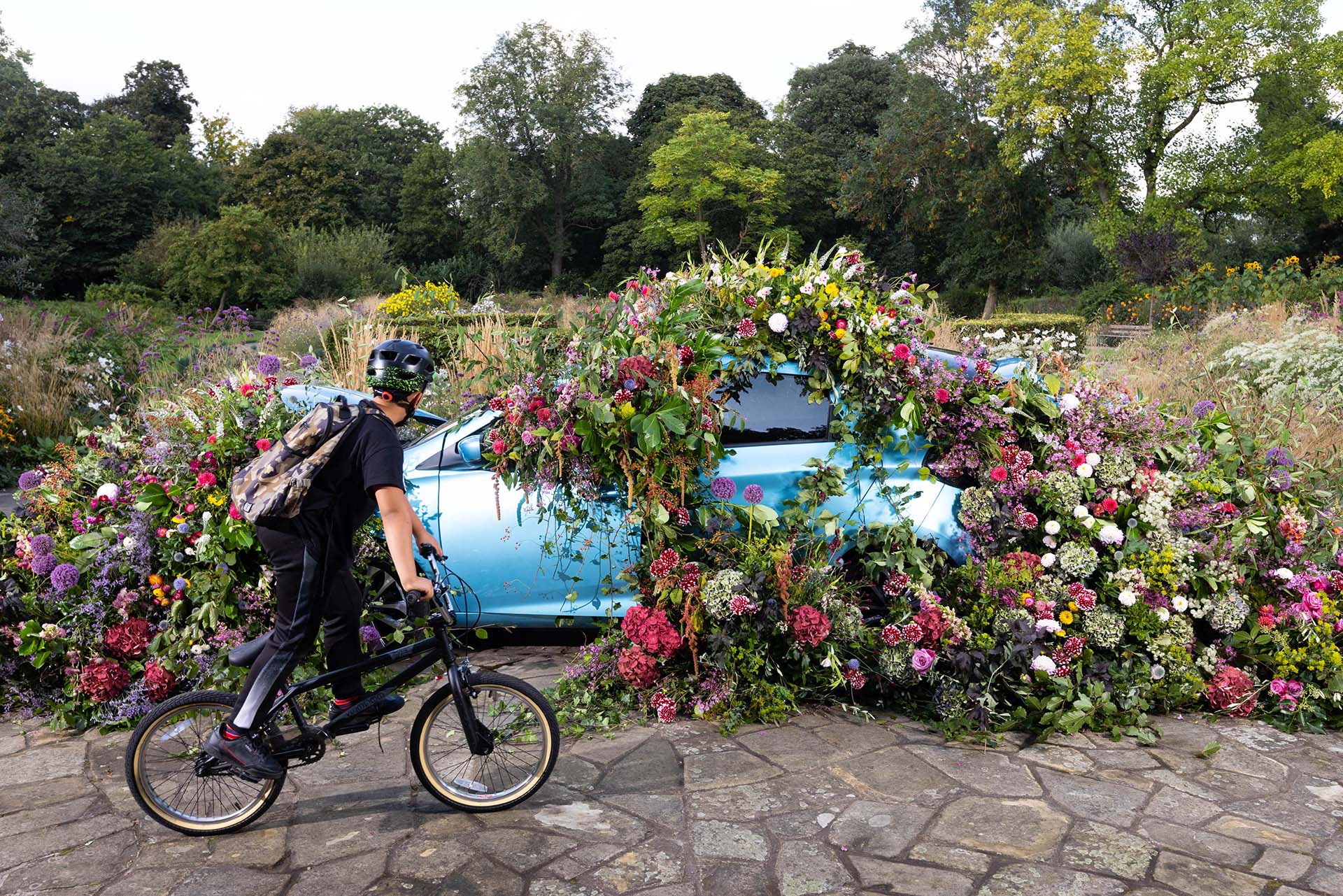 The UK’s most cherished native wildflowers are facing extinction. In a large part, this is because of vehicle emissions and air pollution, which is changing the face of the UK’s countryside, meadows and road verges, which are home to 45 percent of Britain’s total flora.

As the world faces an ongoing environmental crisis, with 40 percent of the world’s plants and fungi threatened with the risk of extinction, and 5.8 percent risk created by pollution, the partnership aims to raise awareness of the positive effects that switching to electric vehicles (EVs).

This switch can have a massive effect on the UK’s flora and green spaces, as well as on public health and the climate. Renault, a pioneer in electric mobility pledging that 90 percent of its sales mix will be electric vehicles in 2030, has joined forces with conservation charity Plantlife.‍

To inspire the need to take action to protect British wildflowers and green spaces that are fast disappearing, a dramatic floral installation was unveiled in the Old English Garden at London’s Victoria Park. This features Europe’s bestselling electric vehicle of 2020, the Renault Zoe.

It was designed by celebrated florist and sustainability champion Larry Walshe, who was awarded a medal for his critically acclaimed display at The Chelsea Flower Show 2021. The new installation supports Renault’s mission to make electric travel accessible to everyone, as well as its commitment to the development of large-scale electric mobility.

It features a garden of blooms and foliage bursting outwardly from the Zoe. A detailed meadow-like effect of organically grown flora cascades throughout the vehicle, alongside both the boot and bonnet and onto the floor.

The car was decorated with over 2,500 flowers and features native British wildflowers, including Gentiana, as well as species that are classified as endangered including Gladioli, Dahlias and the All 4 Love Rose, which is the world’s most endangered rose.

The installation challenges the UK’s 32 million drivers to accelerate switching to electric cars before the ban on the sale of new petrol and diesel cars in 2030.

Tom Barker, Renault UK electrification manager, said: “We all know that electric driving is better for the planet, but one of the least discussed benefits of electric driving is the abundantly positive impact it will have on our gardens and green spaces.

“The government has legislated to only produce electric cars and vans by 2030, but our pledge is more than that. We’re committed to making zero-emissions travel accessible to everyone, with electric driving not only benefitting the planet overall, but our green spaces we appreciate and care so much for.”

The thought-provoking exhibit complements Renault’s ongoing Be Mindful, Don’t Idle awareness campaign that aims to help improve air quality outside schools. This is because idling engines, which are common during school drop-off and pick-up times, contribute the equivalent of 150 party balloons-worth of emissions unnecessarily into the atmosphere every minute per vehicle.

Sitting in traffic on the motorway or country roads with an idling engine causes the same volume of unnecessary emissions to infiltrate the surrounding flora and fauna, expediting the extinction of rare species and wildflowers.

Larry Walshe, award-winning florist, said: “I wanted to create an installation that celebrated the natural wonder of beloved and at-risk flora. Bold, beautiful and provocative, the piece confronts people to think about their impact on the environment and make positive changes to help protect and conserve our native flowers.”

The all-electric Zoe and Renault’s offering of the largest mix of electric vans, as well as E-Tech hybrid and plug-in hybrid options spanning the range from small cars to family SUVs, provide a solution for zero-emission mobility and the prevention of idling, which contributes to improved air quality, health, and biodiversity.

As industry leaders in the automotive energy transition, Renault aims to be the greenest brand in Europe by 2030, with nine out of 10 cars on sale being electric.

With up to 245 miles (394km) of range available from a single charge, and sustainable materials available inside the Zoe, it was the ideal electric mobility champion to demonstrate the connection between electric vehicle uptake and the positive impact on nature.

Ian Dunn, Plantlife CEO, said: “A concerted push to electrify vehicles is a vital part of the essential journey to reduce emissions and we applaud Renault in their ambition to accelerate their EV plans ahead of the 2030 hard deadline set by the UK government.

“Cleaner cars delivered at pace offer fresh hope to wild plants that have been force-fed a junk diet of fossil fuel fumes for decades. Nowhere is this more keenly felt than on road verges, where air pollution from vehicles combined with poor management has seen floral diversity plummet by 20 percent.

“Vigorous species, such as nettles, that can tolerate polluted soils have outcompeted more delicate wildflowers, like harebell.”

The flowers that were used in the installation were distributed to charitable causes across the capital.